Can “Religious Freedom” Be A Defense To Criminal Charges? 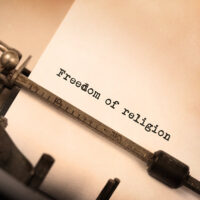 The First Amendment guarantees every person the right to freely exercise their religious beliefs. Federal laws such as the Religious Freedom Restoration Act (RFRA) further provide that the government “may substantially burden a person’s exercise of religion” only if it furthers a “compelling governmental interest” and is the “least restrictive means” of furthering that interest. In certain cases, the RFRA may be even raised as a defense to criminal prosecution.

At the same time, neither the RFRA nor the First Amendment are “blank checks,” permitting people to break the law simply because it might represent a genuine exercise of their particular religious beliefs. A recent decision from the U.S. 11th Circuit Court of Appeals, United States v. Grady, offers some insight into this subject.

This case arose from a 2018 incident at the Kings Bay naval base in Georgia. Kings Bay is home to a number of U.S. Navy nuclear submarines. As such, access is tightly restricted and members of the general public are not allowed on the main area of the base. There is, however, a memorial located outside of the main gates of the base where groups regularly demonstrate or protest with permission from the Navy.

The defendants in this case were opposed to nuclear weapons, which they felt were immoral and violated their religious beliefs. Rather than conduct a protest at the memorial, however, they decided instead to break into Kings Bay one evening–breaking a padlock to gain entry–and proceeded to conduct what they considered “peaceful protest.” This included spray painting messages around the base, removing signage, and pouring human blood at various locations.

The government subsequently charged the protesters with a number of federal crimes, including conspiracy, destruction of property on a naval base, and trespassing. Three of the protester-defendants filed motions with the trial court to dismiss the indictments. They argued their actions were “in accordance with their deeply held religious beliefs” and were therefore protected under the RFRA. The trial court denied the motion and a jury later convicted the defendants on all charges.

On appeal, the 11th Circuit similarly rejected the defense’s arguments to invoke the RFRA. The appellate court noted the issue was whether or not the government met its burden under the statute to prove that criminal prosecution was “the least-restrictive means” of asserting its interest in protecting the naval base without unduly burdening the defendants’ religious beliefs. Here, the defendants could not point to a least-restrictive alternative, as their goal was “to practice symbolic yet destructive disarmament” of the naval base. And “nothing in RFRA supports destructive, national-security-compromising conduct as a means of religious exercise.”

There are, of course, other cases where prosecutors have overstepped their authority in an attempt to criminalize protest and the exercise of religious beliefs. If you find yourself in such a position and need legal advice from an experienced Orlando criminal defense attorney, contact the Baez Law Firm today to schedule a consultation.