Does The First Amendment Protect Panhandling? 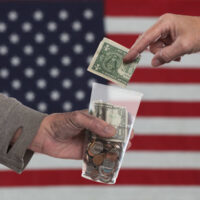 The First Amendment broadly protects every person’s freedom of speech. This is not limited to political speech. It also protects speech purely designed to advance one’s own interests–even when that may annoy or inconvenience others.

For example, courts have consistently held that asking for money on public streets–i.e., panhandling–is an activity protected by the First Amendment. This does not mean that local governments can never regulate panhandling. But such regulations must be “content-neutral” and not expressly target panhandling as such. And courts will subject any such regulation to “strict scrutiny,” which is the most stringent form of judicial review of government action.

For example, the Florida Second District Court of Appeal recently overturned the conviction of a Lee County man convicted of violating an anti-panhandling ordinance adopted by the City of Fort Myers. In Watrous v. State, a police officer arrested the defendant, whom the officer described as “actively begging” for money at a bus station. Prosecutors subsequently charged the defendant with violating the city code, which provides, “No person may ask, beg or solicit alms in any public transportation vehicle, or at any bus stop.”

Before the trial court, the defense moved to dismiss the case, arguing the Fort Myers ordinance violated the First Amendment. The trial judge disagreed, holding it was a “content-neutral regulation of a traditional forum.” The court proceeded to convict the defendant of panhandling.

On appeal, the Second District held that the trial court only applied “intermediate scrutiny” to the city ordinance when “strict scrutiny” was called for. Even the state conceded the regulation could not survive the higher standard.

And contrary to the trial court’s decision, the Second District said the anti-panhandling ordinance was clearly a “content-based regulation of protected speech in a traditional public forum.” Such restrictions are only permissible under strict scrutiny if it is “narrowly tailored” to further a “compelling” state interest. And while the prosecution offered some vague assertions about the need to “prevent nuisance”, protect the local economy, and so forth, the Second District said “none of these interests are compelling in this context.” At best, the defendant’s conviction was only “hypothetically related” to such interests. As such, the defendant’s panhandling conviction was unconstitutional and had to be reversed.

We have seen more and more efforts recently to crack down on acts of speech and public protest. Cases like this, however, demonstrate that courts are prepared to stand up for the First Amendment, especially when it protects unpopular or so-called nuisance speech.

If you have been charged with a similar crime, or if the police have violated your constitutional rights in any way, it is crucial that you work with an experienced Orlando civil rights lawyer who will zealously defend you in court. Contact the Baez Law Firm today to schedule a free initial consultation with a member of our criminal defense team.