Proving Defamation By a Former Employer in Orlando 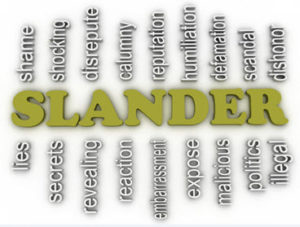 When someone says something bad and/or untrue about another individual, it is considered gossip, and is not looked at as an illegal offense. However, when a false statement is made for the sole purpose of tarnishing someone’s reputation – especially in the professional sense – the statement is no longer considered just “gossip,” but is instead considered “slander,” or “defamation.”

Because defamation can negatively affect one’s professional life and can take away from any potential earnings, it is characterized as a personal injury under Florida law. Any victim of defamation may be eligible for damages for both financial loss and emotional distress.

Unfortunately, many defamation cases result from the slander or libel of an employer about a past employee. If you are the victim of defamation at the hands of your former employer, contact The Baez Law Firm and ask to speak to one of our Orlando civil litigation lawyers regarding causes of action you can take against them.

What is Defamation, and How Can You Prove It?

Defamation occurs when an individual makes an intentionally false statement about another individual in the hopes that it will harm that person and/or their reputation. The oral form of defamation is referred to as “slander,” while the written form is known as “libel.” Typically, when an employer commits either form of defamation, it is because they are trying to ruin an employee’s or former employee’s chances of getting another job. In order to do this effectively, the employer makes false statements regarding the employee’s work performance and character, and typically only when a potential new employer requests a reference.

Furthermore, the plaintiff must also prove that the defendant’s false statements amounted to at least negligence on his or her part.

Furthermore, the plaintiff must be able to prove that the supposed defamation was not just one of the following:

At The Baez Law Firm, our civil litigation lawyers can protect your name and reputation against any libel or slander committed by a previous employer. If your former employer is making or has made it difficult for you pursue future employment, do not hesitate, and contact the Orlando defamation lawyers at The Baez Law Firm to learn more about your legal options for combatting their actions. Schedule your free consultation by calling 800-588-BAEZ today.