When Does Offensive Speech Cross The Line Into Criminal Activity? 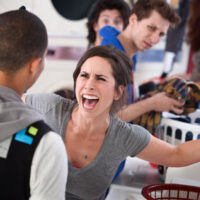 The First Amendment provides broad protections for freedom of speech. Even if particular speech is upsetting or produces a strong emotional reaction in the listener, that does not make the speech criminal. At least in most cases. The courts have recognized some exceptions to the First Amendment, including one for “true threats.”

As defined by the U.S. Supreme Court, if you “communicate a serious expression of an intent to commit an act of unlawful violence to a particular individual or group of individuals,” that is not protected speech. Furthermore, federal law prohibits anyone from using the Internet to communicate a “threat to kidnap any person or any threat to injure the person of another” or engage in other acts that may be considered “cyberstalking.”

The U.S. 11th Circuit Court of Appeals recently addressed a case, United States v. Fleury, where a Florida man was convicted of these very crimes. The defendant argued the convictions violated his First Amendment rights. The appellate court disagreed.

This case actually has its origins in another highly publicized criminal incident, the 2018 mass murders at the Marjory Stoneman Douglas High School in Parkland. The defendant had nothing to do with that case. But according to federal prosecutors, the defendant decided to harass some of the Parkland survivors through social media. In some of the messages, prosecutors said the defendant actually used the name of the actual Parkland shooter as a pseudonym. Many of these messages contained specific threats to kill the Parkland survivors, such as, “With the power of my AR-15 you all die.”

Law enforcement eventually traced the messages to the defendant. Prosecutors charged him with four counts of making threats and cyberstalking. At trial, the defendant admitted to sending the messages. But he argued that due to the fact he was autistic and suffered from ADHD, he “did not understand that his actions would cause substantial emotional distress to others.” The jury did not accept this defense and convicted the defendant on all charges. The judge subsequently imposed a sentence of more than 5 years in federal prison.

In upholding the sentence and conviction, the 11th Circuit said the defendant’s messages were not protected speech under the First Amendment. The defendant was not addressing matters of “public concern” when he contacted the Parkland victims; rather, he was “focused only on exacerbating the victims’ grief.” More to the point, the messages viewed as a whole “indicated a serious expression of an intent to commit an unlawful act of violence toward each victim.”

Speech–even offensive speech targeting crime victims–can still be protected speech under the First Amendment. But there is a line when such speech may cross the line into criminal activity. If you are facing possible criminal charges arising from the exercise of your civil rights and need representation from a qualified Orlando federal crime lawyer, contact the Baez Law Firm today to schedule a consultation with a member of our team.