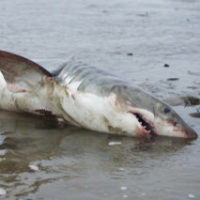 The video went viral in late July, and allegedly implied that the shark had purposely been roped by the tail and dragged by the three men in a speedboat. It triggered a national outcry, as many animal advocates labeled it “animal lynching.”

State anti-animal cruelty statutes can be confusing, as many of them only apply to companion animals (like dogs and cats), as opposed to wildlife, which has people have historically been allowed to hunt in each state.

In Florida, the law states that anyone who overloads, overdrives, torments, deprives an animal of shelter or sustenance, mutilates, kills, or otherwise treats any animal in a cruel or inhumane manner commits animal cruelty, which is a misdemeanor of the first degree. This includes knowing and intentional torture or torment of an animal which injures, mutilates, or kills the animal. The law defines an animal as an “ever living dumb creature,” and has been interpreted to not only protect companion animals (such as dogs and cats), but also livestock.

And yet, the law also states that anyone who is pursuing or taking wildlife, or participating in hunting, is (instead) subject to regulations via the Fish and Wildlife Conservation Commission, indicating that wildlife–including marine life–is not necessarily subject to the exact same anti-cruelty regulations as other animals, such as domestic animals.

Indeed, it is rare for the Florida Fish and Wildlife Conservation Commission to charge individuals with a crime like this, and is arguably due to the national attention that the video drew in these specific circumstances. As a result of the investigation, the Commission confirmed various criminal violations, including:

Penalties for these charges include serving up to one year in prison and/or paying a fine of up to $10,000.

Reach Out to a Criminal Defense Lawyer

If you have been charged with animal cruelty, you need to consult a knowledgeable and aggressive criminal defense lawyer right away.

At The Baez Law Firm, our Florida and Massachusetts criminal defense lawyers understand how quickly a misdemeanor can turn into a felony, and what it takes to fight these charges. To ensure the best possible outcome, contact our lawyers right away to schedule your free consultation.