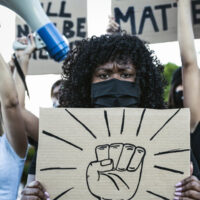 According to a report from ABC News, LaToya Ratlieff has filed a civil rights lawsuit against the Fort Lauderdale Police Department. She was left nearly blind after being struck in the eye by a rubber bullet during a Black Lives Matter (BLM) protest following the killing of George Floyd in May of 2020. Here, our Orlando civil rights lawyer provides a more detailed explanation of what we know about this police brutality case.

On May 31st, 2020, LaToya Ratlieff attended a BLM protest seeking justice for George Floyd in Fort Lauderdale, Florida. During the civilian demonstration, officers from the Fort Lauderdale Police Department released tear gas on the crowd. A video taken by a bystander shows Ms. Ratliff choking on the tear gas. The video then shows her being struck by a rubber bullet shot by one of the law enforcement department’s officers. The rubber bullet is of a kind that can travel at 200 miles per hour (MPH). The victim suffered severe injuries after being struck by police, including:

The civil rights complaint states that Ms. Ratlieff is still nearly blind in the affected eye due to the severity of her injuries. In addition, the lawsuit states that she is still suffering from persistent migraine headaches and serious emotional trauma.

The lawsuit filed by LaToya Ratlieff argues that her civil rights were violated by the Fort Lauderdale Police Department. She is seeking financial compensation for her damages. Several different specific arguments are raised in the complaint, including:

The federal civil rights lawsuit against the Fort Lauderdale Police Department was filed under 42 U.S.C. § 1983. Often referred to more simply as a Section 1983 lawsuit, this type of federal claim allows individuals to hold police officers and police departments legally liable for a deprivation of their rights. Police brutality claims fall under 42 U.S.C. § 1983.

Speak to a Police Brutality Civil Rights Lawyer in Florida

At The Baez Law Firm, we are strong, relentless advocates for justice. If you or your family member was the victim of police brutality, our civil rights attorney is more than ready to help. Give us a call now or contact us online to set up a free, strictly confidential consultation. From our offices in Orlando and Miami, we provide civil rights representation throughout all of Florida.