Can A Florida Judge Clear You Of A Probation Violation Without A Hearing? 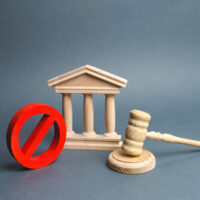 Probation is not, contrary to what many people think, a “free ride” for a convicted felon. To the contrary, probation requires a defendant to strictly adhere to a number of restrictions and other conditions in their daily life. If a probation officer has reason to believe a probationer has violated any of these rules, the officer will file a “Violation of Probation” affidavit.

This affidavit will lead to a hearing before a judge to determine if the probationer, in fact, committed the alleged violation. This hearing is not subject to the same formalities as a criminal trial. For example, the state does not have to prove your guilt beyond a reasonable doubt, only by a “preponderance of the evidence.” Even if a judge determines there has been a violation, however, that does not necessarily mean the probationer goes to prison. The judge has broad discretion to continue probation or modify the existing terms.

But can a judge simply decide on their own that there was no violation and dismiss the state’s affidavit without first holding a hearing? The Florida Third District Court of Appeals recently addressed this question. In State v. Gutierrez, a man charged in two separate theft cases pleaded “no contest” to all charges and received two years probation.

But on the day of the hearing the judge–without taking any testimony or conducting any formal proceedings–decided on their own initiative to simply dismiss the state’s affidavit outright. The prosecutors then appealed, arguing the trial court abused its discretionary authority.

The First District agreed. Because the defendant in this case was considered a “violent felony offender of special concern,” Florida law required the trial court to conduct a full probation violation hearing. Absent any agreement from prosecution, the judge could not summarily dismiss the matter.

The First District noted that the trial court was not required to accept the negotiated plea agreement presented by the prosecutors and the defendant. But if the judge rejects that agreement for any reason, then the defendant has the right to change his plea. And the judge must still conduct a hearing and “make written findings whether the defendant poses a danger to the community.”

Before you plead guilty to a crime and agree to probation, you need to make sure that you understand all of the consequences of that decision. An experienced Orlando criminal defense attorney can provide you with invaluable guidance and representation. Contact the Baez Law Firm today to schedule a consultation.