Can I Appeal My Criminal Conviction To The Supreme Court? 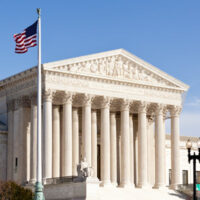 The same is actually true when it comes to cases heard in Florida state courts. The Florida Supreme Court does not hear most direct appeals in civil or criminal cases. There are some exceptions–notably death penalty cases, which are subject to direct appeal–but for the most part, if someone is convicted of a crime, they only have the right to appeal to an intermediate court. Any further appeal is subject to the discretion of the higher reviewing court, whether it is the Florida Supreme Court or the United States Supreme Court.

How Criminal Appeals Work in Florida

In the Florida judicial system, felony cases are heard in the Circuit Court. The Circuit court is what is considered a “trial court.” The state is divided into 20 circuits, each with its own circuit court. Most of the circuits include multiple counties and cities. For example, the Ninth Judicial Circuit includes both Orange County (Orlando) and Osceola County.

A person convicted of a criminal charge has the right to file a direct appeal from the circuit court that heard their case to a District Court of Appeal. There are five such district courts in Florida. Similar to the Circuit Courts, each District includes multiple Florida counties. Orange County is one of 13 counties included in the Fifth District. So a criminal appeal from the Ninth Judicial Circuit would be heard by the Fifth District Court of Appeal.

The Fifth District normally has a total of 11 judges. All of these judges will not hear a direct appeal, however; instead, a typical appeal is heard by a three-judge panel. The appeal itself is then decided by a majority of that panel. In rare cases, the full 11-judge court may decide to hear or rehear an appeal as a group–a procedure known as en banc–if there is an exceptional legal issue involved.

Once the District Court of Appeal issues its ruling, the losing side may then ask the Florida Supreme Court to conduct a discretionary review. This is just what it sounds like. The state supreme court has the discretion to hear the appeal. The most common reason for the Supreme Court to exercise this discretion is to resolve a conflict between the District Courts of Appeal on a point of law, e.g., the Fifth District has interpreted a law differently than the Third District.

A criminal case is not over just because the jury declares a defendant “guilty.” There are often multiple grounds for a defendant to seek appellate review. An experienced Orlando criminal appeals lawyer can review your case and zealously represent you before the higher courts. Contact the Baez Law Firm today if you need to speak with an attorney right away.