Can the Government Deport a Legal Immigrant for a Vehicular Homicide Conviction? 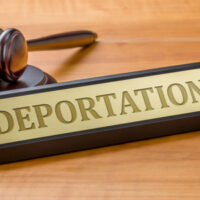 A criminal conviction can place your immigration status in jeopardy. Even if you have entered the United States lawfully, federal law allows the government to deport you if you are convicted of “two or more crimes of moral turpitude, not arising out of a single scheme of criminal misconduct.” This includes both federal and state crimes.

Federal Court: “Reckless” Driving Can Be Considered a “Crime of Moral Turpitude”

So what qualifies as a “crime of moral turpitude”? Congress did not provide a more specific definition when it adopted this rule. But the U.S. 11th Circuit Court of Appeals, which has federal appellate jurisdiction over Florida, has said that moral turpitude refers to “an act of baseness, vileness, or depravity in the private and social duties which a man owes to his fellow men, or to society in general, contrary to the accepted and customary rule of right and duty between man and man.”

To put it in simpler terms, a crime of moral turpitude is one where the defendant engages in reckless conduct that places someone else at risk of injury or death.

In a recent decision, Smith v. Attorney General, the 11th Circuit explained how vehicular homicide is a crime of moral turpitude for purposes of a deportation proceeding. The defendant in this case has lived in the United States for nearly 50 years, having lawfully emigrated from Jamaica in the 1970s. In 1988, the defendant was convicted of an aggravated assault. This was his first “crime of moral turpitude.”

The second occurred in 2006, when the defendant was involved in a car accident that caused the death of three people. Florida prosecutors charged the defendant with DUI manslaughter. A jury acquitted the defendant on those charges but found him guilty of three counts of vehicular homicide. The Florida court then sentenced the defendant to 21 years in prison.

Federal immigration authorities then moved to deport the defendant. The defendant argued that vehicular homicide was not a crime of moral turpitude, as Florida does not require proof of “intent” to hurt others for a conviction. The Board of Immigration Appeals rejected this argument and ordered the defendant’s deportation. On appeal, the 11th Circuit agreed with the Board.

The 11th Circuit’s reasoning was simple: While Florida’s vehicular homicide charge does not require proof of “culpable negligence”–the standard for manslaughter–it still requires evidence that the defendant was “reckless.” Indeed, given that “reckless driving” is considered a lower offense than vehicular homicide, the Court said it stood to reason that the higher charge also included the element of recklessness. And as far as a “crime or moral turpitude” was concerned, that was enough to justify the defendant’s deportation.

As you can see, even if you have spent decades building a life in this country, a single criminal conviction can force an otherwise legal immigrant to leave. So if you are an immigrant facing criminal charges and need the assistance of an Orlando criminal defense attorney who will zealously represent your interests, contact the Baez Law Firm today to schedule a consultation.