Can The Police Arrest And Search You for Violating A Municipal Ordinance? 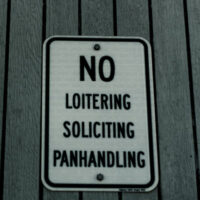 Not every action that violates the law is a crime. If you run a red light, for example, you have committed a non-criminal traffic infraction. A police officer can briefly stop you and issue you a ticket. But they cannot handcuff you or otherwise detain you any longer than is necessary to write the ticket. Put another way, Florida law does not allow the police to make a “custodial arrest” for civil infractions that do not carry any criminal penalties.

The Florida Fifth District Court of Appeals recently addressed a related issue–namely, whether the police can make a custodial arrest for violating a local ordinance that does carry criminal penalties. The case before the appellate court, Hull v. State, originated here in Orlando. One day in September 2019, an Orlando Police Department officer was observing live video from a police substation. The video showed a group of individuals “gathering, dancing, and drinking beer in an empty parking lot in downtown Orlando.”

The officer went to the parking lot to arrest the group for violating a city ordinance prohibiting the possession of open containers of alcohol. The defendant was part of the group. The officer searched the defendant during the arrest process and found “suspected narcotics” in the defendant’s possession. This ultimately led to criminal drug possession charges.

Before the trial court, the defendant argued the search was illegal, since it was unlawful for the police to arrest him for violating a municipal ordinance. The trial judge disagreed and held the search was lawful. The defendant then appealed that ruling to the Fifth District.

But the Fifth District agreed with the lower court. The defendant’s argument was largely based on a 1993 decision from the Florida Supreme Court, Thomas v. State, which held that a “full custodial arrest is unreasonable” when a defendant is charged with “violating a municipal ordinance regulating conduct that is noncriminal in nature.” However, the Fifth District said this ruling does not prevent a custodial arrest for violating an ordinance that carries criminal penalties, such as Orlando’s open-container ban.

Furthermore, unlike the local ordinance at issue in Thomas, which conflicted with state law, the open-container ordinance here had no such conflict. And the state permits municipalities to “designate enforcement methods and penalties” for its lawfully enacted ordinances. So under the circumstances, the defendant’s arrest was lawful, and therefore so was the search that uncovered the drugs.

Anytime you are placed under arrest, you need to be aware of your rights. You do not have to consent to the search of your property. And you do not have to answer any police questions about your whereabouts or activities. And of course, you should never say anything until you have had an opportunity to speak with an experienced Orlando criminal defense attorney. Contact the Baez Law Firm today if you need legal advice or representation in connection with any criminal matter.