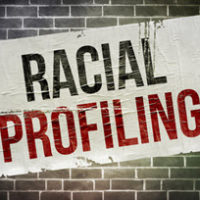 Sadly, racial profiling happens every day, often completely unreported—but nonetheless still incredibly unjust. When it does garner news headlines—as it sometimes does with “celebrities” who experience it—it’s an opportunity for all of us to wake up and take notice (as well as work harder to defeat it).

This was the case in early September, when Bob Johnson, the co-founder of BET, was allegedly the victim of racial profiling after attempting to check into a five-star hotel in Florida. According to Johnson, he was refused his reserved room because he was wearing sunglasses—even after he handed over his credit card, driver’s license, and passport. The clerk specifically informed him that he could not check Johnson in if he did not take off his glasses.

The hotel has responded that it is their policy to ask that anyone checking in remove their glasses in order to ensure that identification is accurate, similarly to what the TSA does at the airport. Yet, not a lot of hotels have policies like these, indicating that it is arguably unreasonable, and even contains overtones of racial profiling. This also raises interesting questions as to when/how a private business can refuse service to someone, and when these activities technically constitute civil rights violations.

Whether or not a group or class is “protected” is thus dependent upon whether there is a law in place prohibiting discrimination based on that factor. If there is not, then that group of people can sometimes legally be denied service. Take, for example, Florida’s law: it deems any discrimination due to color, race, religion, gender, pregnancy, national origin, handicap, age, or marital status in education, employment, housing, or public accommodation to constitute unlawful discrimination. It is therefore illegal for a business like a hotel to refuse service based on any of these factors, even if they claim that they are refusing service due to other factors (like strange internal policies), while it is obvious that they are actually engaging in racial profiling.

Treating people differently based on their race is illegal. If you have been wrongfully discriminated against in Orlando, contact the Baez Law Firm today to find out how our experienced civil rights attorneys can help you achieve justice.