Could I Go To Jail For Driving With A Suspended License? 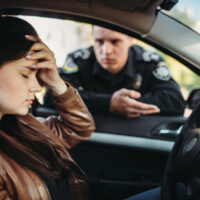 Traffic violations typically do not result in jail time. One exception, however, is driving with a suspended license (DWLS). If your driving privileges have been previously suspended, revoked, or canceled, and you are caught behind the wheel of a vehicle, you may actually face some amount of jail time. Indeed, in some cases jail time is mandatory under Florida law.

The Florida Fourth District Court of Appeal recently addressed just such a situation. In State v. Moss, the defendant was initially stopped by police after running a stop sign. The officer soon discovered the defendant’s driver’s license was suspended. Even more seriously, the defendant had three prior convictions on his record for DWLS.

To make matters worse, a couple of months before the defendant’s arrest, the Florida legislature amended the DWLS statute to require a minimum 10-day jail sentence for a “third or subsequent conviction” of the same crime. Despite this change, the judge accepted a “no contest” plea from the defendant and only imposed a sentence requiring the payment of court costs. The prosecution objected, citing the new 10-day mandatory minimum law. But the judge still declined to impose a jail term, believing it amounted to an ex post facto (retroactive) punishment.

The prosecution appealed to the Fourth District, arguing the judge had effectively imposed an illegal sentence. The Fourth District agreed. It noted the 10-day minimum rule took effect on October 1, 2019. The defendant’s arrest occurred on December 24, 2019. So there was no question the new law had already taken effect.

Nevertheless, the trial court apparently believed that since the new law “enhanced” the penalty for a third or subsequent DWLS violation, it could not be applied to the defendant’s prior convictions. Again, the Fourth District disagreed. The 2019 law simply increased the penalty for the defendant’s current DWLS violation; it did not affect the penalties applied to his prior convictions. There was therefore no ex post facto violation.

Obviously, it is never a good idea to drive with a suspended or revoked driver’s license. But cases like this demonstrate how seriously prosecutors take such cases. Do not assume that this is “just another traffic violation” where you will be able to pay a fine and go about your day.

If you need legal advice or representation from an experienced Orlando traffic offenses lawyer, contact the Baez Law Firm today to schedule a free consultation.