Does A Jury Need To Unanimously Agree About The Specific Criminal Act Committed By The Defendant? 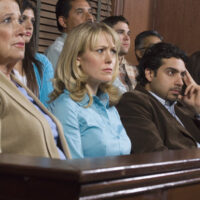 The right to a jury trial means that the jurors must reach a unanimous verdict. Strictly speaking, this means that the jurors must all agree that the prosecution has proven each element of the alleged criminal offense “beyond a reasonable doubt.” If a single criminal charge encompasses two or more separate incidents, the jury must be unanimous as to at least one of the specific acts.

For instance, in a 2007 Florida criminal case, Perley v. State, prosecutors charged a defendant with a single offense of escaping from police custody. At trial, the prosecution presented evidence suggesting the defendant actually made two separate escapes. But the defendant was only charged with one count of escaping. The jury convicted the defendant, but that conviction was later thrown out on appeal. The appellate court said it was not clear which of the two escapes the jury believed the defendant committed. Some of the jurors might have concluded it was the first escape, while others the second escape. Under the circumstances, it was impossible to know whether the jury actually reached a unanimous verdict.

Similarly, the Florida Fourth District Court of Appeals recently overturned the conviction of a defendant charged with violating a stalking injunction. Here, the problem was that it was not clear which provision of the injunction actually violated. As such, the appellate court said the defendant was entitled to a new trial.

The defendant in this case got into some sort of incident with his next-door neighbor. The neighbor subsequently obtained an injunction for protection against stalking. The injunction contained at least seven separate provisions, detailing what conduct the defendant was required to refrain from.

At trial, however, the prosecution said the defendant committed at least five potential violations of the injunction. The trial judge never told the jury they were required to unanimously agree that the defendant had violated at least one of these five specific acts. Nevertheless, the jury did find the defendant guilty.

As noted above, the Fourth District threw out the verdict. Citing cases like Perley, the appellate court noted that it was “fundamental error” to not properly instruct the jury that it needed to be unanimous as to a specific alleged act. As it stood, each of the jurors might have believed the defendant violated a different one of the five alleged acts. The court also noted that the terms of the injunction itself only applied to communications with the neighbor herself and not members of her family.

When you are on trial for any crime, you have the right to expect that prosecutors and judges will follow the law. An experienced Orlando criminal defense attorney can help ensure that is the case. Contact the Baez Law Firm today to schedule a consultation with a member of our team.