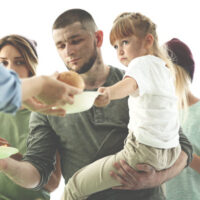 The First Amendment is well known for protecting freedom of speech. In this context, “speech” is not just public speaking or commentary on political issues. It also includes a wide range of expressive conduct that is meant to convey a social message of some sort. Such expression is also protected under the First Amendment, meaning state and local officials must tread carefully before adopting (or enforcing) any regulations that might serve to discourage such forms of speech.

Distributing Food Can Be “Expressive Conduct” Under the First Amendment

For example, the U.S. 11th Circuit Court of Appeals recently held that the City of Fort Lauderdale could not enforce local regulations intended to prevent people from sharing food with homeless persons in a public park. This was actually the second time the 11th Circuit addressed this case.

To provide some additional background, a local nonprofit called Fort Lauderdale Food Not Bombs (FLFNB) promotes the idea that “food is a human right, not a privilege, which society has a responsibility to provide for all.” One way FLFNB spreads this message is by conducting weekly food sharing events in Fort Lauderdale’s Stranahan Park. At these events, FLFNB distributes free food to the homeless, which the group said is primarily designed to spread its political message as opposed to providing charity.

Long before FLFNB started this program, the City of Fort Lauderdale adopted a local ordinance in 2000 that forbade the use of public parks for any “business or social service purpose” without written approval of the city. A Florida court issued an injunction to stop enforcement of this rule on religious freedom grounds. But in 2014, the City adopted a revised ordinance that purportedly complied with the earlier court ruling. As the 11th Circuit described the new ordinance, it “prohibits food service distribution in most parks and does not provide for food sharing as of right in any park.”

On remand, the trial court again denied FLFNB an injunction, holding that the City’s regulations were “lawful” and “content-neutral” restrictions on the “time, place, and manner” of speech. Again, FLFNB appealed. And again, the 11th Circuit reversed. This time, the appellate court said the problem with the City’s rules was that they gave city officials effectively boundless discretion to decide whether a party could engage in “social food sharing.” In other words, it was not a “narrowly drawn” policy that furthered a legitimate governmental interest.

When local governments engage in actions that violate your basic constitutional rights, you do not have to sit there and take it. An experienced Orlando civil rights attorney can help you in seeking justice. Contact the Baez Law Firm today to schedule a consultation with a member of our team.