Is Assault A Felony Criminal Offense In Florida? 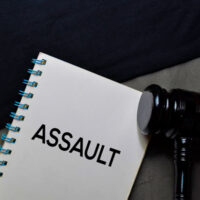 In Florida, assault is broadly defined as the “intentional” and “unlawful” threat of violence against another person that creates a reasonable fear of imminent harm. The severity of an assault charge depends on the specific allegations. Simple assault is a misdemeanor offense in Florida. However, aggravated assault is a felony offense. Here, our Orlando assault and battery defense lawyer explains when an assault can be charged as a felony offense in Florida.

What is Assault (Florida Law)?

Assault is defined and charged under Florida Statutes § 784.011. The statute makes it a criminal act to intentionally threaten to do violence to another person without legal justification. To obtain a conviction in an assault case, prosecutors are required to prove the following three key elements:

To be clear, there is no requirement of actual physical contact to justify an assault charge in Florida. However, prosecutors must prove that the defendant did something beyond their mere words—an overt act—that heightened the threat and the imminence of danger.

Criminal Law Tip (Assault versus Battery): While they are often confused, assault and battery are distinct criminal charges in Florida. Assault involves the actionable threat of physical violence. In contrast, the crime of battery requires actual physical force.

Assault can be charged as either a misdemeanor or felony criminal offense in Florida. Depending on the nature of the allegations, the crime will be:

At The Baez Law Firm, our Florida criminal defense lawyer has the skills and expertise to handle the full spectrum of assault and battery charges. If you or someone you know is facing a felony assault charge, we are more than ready to help. Contact us by phone or contact us online for a completely confidential initial appointment with a lawyer. We defend misdemeanor and felony assault and battery charges in Orlando, Orange County, and throughout Central Florida.