Is It Possible to Commit Both Battery and Aggravated Battery at the Same Time? 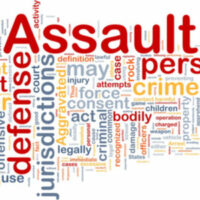 In Florida, battery is the crime of intentionally touching or striking another person against their will, or intentionally causing bodily harm to another person. A first offense for battery is considered a misdemeanor. However, there is a separate felony charge for aggravated battery. This involves a battery that results in “great bodily harm, permanent disability, or disfigurement” to the victim. Alternatively, if a battery involves the use of a “deadly weapon,” it is classified as aggravated battery regardless of the actual injuries suffered by the defendant.

A Florida appeals court recently addressed a scenario where a defendant was tried and convicted of both battery and aggravated battery for the same criminal incident. This case began when police arrived at the defendant’s home to arrest his wife on an unrelated charge. The defendant, apparently unhappy with these events, threatened to sic his dogs on the officers.

According to the appellate court’s opinion, the officers told the defendant to take his dogs and wait outside while they executed the arrest warrant for his wife. While the defendant initially complied, the Court said that “once outside, he began to rile up the dogs by banging their heads together and yelling at them.” The defendant then tried to re-enter his house. When the officers directed the defendant to remain outside, he responded by shoving one of the officers. He then let go of one of his dogs, a pit bull, and commanded him, “dog up, dog up.” The dog proceeded to bite the officer’s leg.

Prosecutors subsequently charged the defendant with battery (shoving the officer) and aggravated battery (siccing the dog, i.e., a deadly weapon, on the officer). The jury convicted the defendant of both charges. On appeal, the Florida First District Court of Appeals considered whether or not this amounted to a double jeopardy violation.

The Constitution states that no person may be “subject for the same offense to be twice put in jeopardy of life or limb.” That said, it is permissible for a jury to convict a defendant of two crimes arising from a “single criminal episode” when there are “two distinct acts” involved. In this case, even though the shove and the dog attack both occurred within the span of less than a minute, the Second District said the jury was within its rights to find these were two distinct acts, one involving battery and the other aggravated battery.

Prosecutors will often try and include as many criminal charges as possible when trying a defendant for a single incident. In some cases, multiple charges are a tactic designed to encourage a plea bargain. Other times, they may enable a jury to convict a defendant of a felony when the other charges are only misdemeanors.

If you find yourself in this situation it is critical to work with an experienced Orlando criminal attorney who will zealously represent your interests in court. Contact the Baez Law Firm today if you need to speak with an attorney right away.