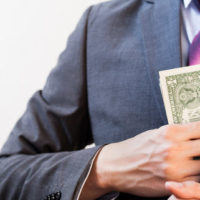 On Monday, Feb. 13th, long time manager of Harriet Tubman Terrace apartments in Poughkeepsie, Carl Immich, was found guilty of embezzling more than $150,000 from the federally subsidized complex. On Oct. 5th of last year, he plead guilty to the charges of two counts of embezzlement of over $5,000, and on April 13th, he will report to prison officials for his 18-month stay in federal prison. His sentence also includes three years post-release suspension and an order to pay back all of the money he stole. Apparently, Immich felt that his more than $1 million salary was not enough, and used the stolen money over a period of five years to pay for expenses such as gas, travel, gym memberships, family phone bills, and dental bills.

Embezzlement is the act of misappropriating assets – typically money – by one or more individuals who have been entrusted with said assets. In other words, it is using a position of power to steal. Embezzlement is categorized as a white collar crime, and is usually committed against an organization by a person with a lot of responsibility within the company. In Immich’s case, he was the property manager and responsible for appropriating federal tax dollars in such a way that furthered the mission of the Harriet Tubman Terrace apartment complex. Instead, he used his position of power to steal from those that need it the most.

The crime of embezzlement ranges in severity, from very minor and involving only small amounts of money, to extreme, and involving hundreds of thousands to millions of dollars. Depending on the seriousness of the crime, embezzlement charges can be either a misdemeanor or a felony. If convicted, the consequences may involve fines, imprisonment of anywhere between one and 20 years, or both. In Immich’s case, he was sentenced to both serve time in prison and pay back the money he stole.

At The Baez Law Firm, we have successfully helped clients who have committed one or more of the following:

As you can see, embezzlers can get very creative in their methods, which is why embezzlement typically goes on for years – and costs companies hundreds of thousands of dollars – before the perpetrator(s) is ever caught.

If you have been charged with embezzlement, you have a long and difficult road ahead of you. Typically, a company will not charge an employee with embezzlement unless than have substantial proof that embezzlement was in fact taking place, and that the accused likely played a role. However, that does not mean that you are without hope. The Orlando white collar crime lawyers at The Baez Law Firm aggressively advocate on behalf of the accused to get the best possible outcome. Sometimes this is a reduced sentence, and in the best case scenarios, this is dropped charges altogether. If you have been charged with embezzlement in Orlando, contact our legal team right away at 800-588-BAEZ to schedule your free consultation now.