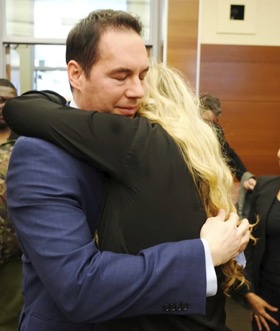 On April 20, 2022, Dr. William Husel was completely exonerated and found innocent by a jury of his peers of 14 counts of murder. The trial came nearly three years after Dr. Husel was indicted on 25 counts of murder with the Baez Law Firm successfully getting 11 of those counts dismissed two weeks prior to trial. Prosecutors said he administered excessive doses of comfort medications with the intent to cause or speed up the deaths of patients he treated in the intensive care unit from 2015 to 2018. The jury also considered and rejected lesser charges of attempted murder.

The nationally reported on trial began in February and lasted months. Evidence presented included thousands of pages of medical records in addition to medical studies, hospital policies, and documentary evidence such as emails and photos. Over 50 witnesses testified for the Prosecution in their efforts to convince the jury that Dr. Husel was a murderer. Witnesses included homicide police, pharmacists, doctors, nurses and administrative employees of Mount Carmel Hospital West, as well as deceased patients’ family members. The evidence presented by the Prosecution included:

In response to the Prosecution’s presentation of evidence, and despite the high level of media attention, complex medical issues, and strong emotions attached, the Defense was able to secure not guilty verdicts for Dr. William Husel.

Dr. Husel always maintained his innocence. Led by Jose Baez, the Defense argued that the patients’ terminal conditions caused their deaths and that the large doses of comfort medications were necessary to allow them to die in peace, comfort, and with dignity after being taken off life sustaining ventilators. In contrast to the Prosecution’s constant assertations that Dr. Husel’s actions occurred “in the nighttime ICU,” the Defense quickly pointed out to the jury that Dr. Husel’s actions were widely known and accepted, clearly not occurring in secret. The jurors were also shown documentation from hospital officials demonstrating their efforts to make Dr. Husel the villain in their narrative to distract from their systemic failures at play.

The Defense argued that dosages are subjective and a patient’s tolerance, weight and pain level can contribute to variations but that a death without pain is paramount when practicing palliative care. It should be up to the doctor at a patient’s bedside to determine the amount needed, not Prosecutors in criminal court. Mr. Baez criticized the case as “absurd,” and exposed the jurors to a police investigation that relied too heavily on misunderstood secondhand information from hospital administrators, who the jurors learned had spoken to major witnesses ahead of law enforcement.

“Why would this man risk his family, his career, 17 years of trying to be a doctor, every single thing he has worked for, to hasten someone’s death or to kill them?” Mr. Baez asked during closing arguments.

Despite the accusations, Dr. Husel’s former colleagues told the jury on cross examination that he was a dedicated doctor who fought to save countless lives, was helpful to everybody in the ICU unit, and was always there to teach and explain. Not only were his actions transparent to all but also recognized as his peers voted him doctor of the year.

Cross examination of patient family members informed the jurors of the financial interests guiding their testimony and exposed the inconsistencies of prior statements they had given that contradicted their trial testimony for the prosecution.

The Defense called one witness, Dr. Joel Zivot, of Emory University. After thoroughly reviewing the medical records of the 14 patients, Dr. Zivot determined they all had severe and unrecoverable illnesses. Dr. Zivot also determined that recovery to a normal state of health was not possible for the patients, and that their underlying medical issues caused their deaths.

There was no evidence, Mr. Baez said, to suggest anything except the truth that the patients suffering from terminal conditions died because life support was removed. The medications were given to help patients die without pain, he said, and Dr. Husel had “dedicated his life to taking care of the ill, to taking care of patients. To saving lives — not to taking them.” “It’s just an unfortunate fact of life that death will come to us all,” he added.

After deliberating for approximately six days, the jury returned not guilty verdicts for all charges of murder against Dr. Husel.

This case is an example of how prosecutors and police can manufacture a criminal case against a dedicated and decorated doctor, based on a flawed investigation, and aided by almost unlimited resources. Although we cannot guarantee the same results, the outcome of this case demonstrates how Jose Baez, Esq., and The Baez Law Firm can advocate on your behalf to achieve the best result possible.