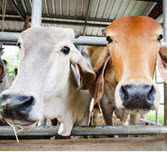 On June 6th, two arrests (in addition to three previous arrests) were made at Larson Dairy in Okeechobee, Florida in connection with animal cruelty charges and an undercover video that allegedly captured the farm employees tormenting the dairy cows. There is also a warrant out for the arrest of a fourth individual from the farm.

This is the fifth dairy farm in Florida that has drawn concern after animal cruelty investigations revealed serious cattle abuse. Those who performed these investigations have indicated that, at each facility, the abuse was a regular occurrence inflicted on the animals on a daily basis. According to the Okeechobee sheriff’s office, they are also taking a close look at Burnham Farms, Davie Dairy, and McArthur Dairy Farm regarding potential animal cruelty violations.

Under Florida law, anyone who unnecessarily deprives, kills, mutilates, overdrives, overloads, or torments any animal commits animal cruelty in the first degree, as punishable by a $5,000 fine. Anyone who intentionally commits an act which results in the cruel death or excessive or repeated infliction of unnecessary pain or suffering to any animal commits aggravated animal cruelty in the third degree, as punishable by a $10,000 fine. The crime also carries a maximum of five years in prison.

While some states exempt animals used on farms from animal cruelty laws—explicitly only covering animals commonly kept as pets, such as dogs and cats—Florida does not, and instead covers any animal that constitutes a “living, dumb creature.” That means that even if an animal is ultimately destined to become a food product, beating, stabbing, and tormenting it can result in being arrested and having charges pressed against you.

In addition, in March of this year, Florida passed a bill that prohibits certain animal welfare offenders from harboring, having, keeping, owning, possessing, or exercising custody or control over any animal for a period of time, as determined by the court. Thus, animal cruelty convictions can have permanent consequences.

Choosing Whether to Prosecute

While the Attorney General decided not to press charges against a teacher who recently came under fire for drowning raccoons during a class demonstration, Florida has pressed charges in other circumstances; for example, against a woman who left a one-year-old Rottweiler to slowly die inside a crate and a man who dragged a dog behind his truck. In general, Florida officials take killing animals by starvation very seriously, pressing both felony and misdemeanor counts of cruelty to animals stemming from these offenses.

If you have been charged with animal cruelty, you need to consult an experienced criminal defense attorney right away in order to understand your rights and whether you are being charged with a misdemeanor or felony, and under what circumstances you can be released on bail. Contact our Florida attorneys at the Baez Law Firm today to find out how we can help.