The Crime of Forgery Under Florida Law 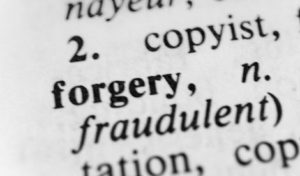 Illegal or not, forgery truly is an art, and like all great pieces of art, there is a great story behind every forged piece. For instance, in 1962, three kids from Tennessee – all aged between 14 and 17 – were caught melting down their town soldiers to make their own coins. While they never got the chance to spend a single one, they were tried in juvenile court, and the Secret Service actually ended up getting involved.

Or consider the story of J.S.G. Boggs, who hand draws reproductions of American currency and trades these pieces of art for everything from food and clothing to shelter. He first discovered that he had a good gig going when supposedly a waitress at a café accidently picked up his doodle of an American bill thinking that it was the real deal. Since then, he has been going around offering his art in exchange for goods and services. The government is hard-pressed to charge him for forgery or counterfeiting, as, because Bogg is not trying to pass off his notes as real currency, nothing he is doing is actually “illegal.”

Forgery and counterfeiting may be veritable forms of art, but they are very illegal art forms, and ones that the American government – and any government for that matter – take very seriously. Most forgery crimes in Florida are punishable by time in prison, and up to several thousand dollars in fines. If you have been charged with forgery, counterfeiting, or “uttering” in Florida, contact a Miami federal crimes defense lawyer right away.

Under Florida law, there are three ways in which a person can be found guilty of forgery:

While very similar, each offense varies slightly in the types of illegalities committed.

Forgery, for instance, is the act of falsifying or altering any public record, certificate, or court document for the means of “legal proof”; falsifying or altering any charter, deed, will, testament, bond, letter of lawyer, policy of insurance, bill of lading, bill of exchange, promissory note, order for the discharge of money, or ticket with the intent to injure or defraud.

Forgery may also occur when an individual possess 10 or more forged checks, notes, bills of credit, or bank bills with the intent to use them to purchase goods or services, or to redeem cash.

Counterfeiting, while can involve the creation and distribution of fake bills, often occurs when an individual manufactures and sells fake designer products and labels. For instance, a handbag sold by a street vendor with a label that is very similar to a designer label, such as Prada, but with a slight variation, is considered to be counterfeit. In order to be charged with counterfeiting, the street vendor must be aware that his or her product possesses a fake label, and they must have intended to use the fake label to attract and defraud potential customers.

Despite popular belief, an individual cannot get into legal trouble simply for buying a counterfeit product, unless they bought the product with the intent to redistribute the product for a profit.

If the counterfeit goods have a retail value of more than $2,500 (as many designer handbags do), or if a person is injured or killed as a result of the counterfeit labels, the manufacturer and distributor can be charged with much more serious criminal charges than simply counterfeiting.

Uttering, under Florida law, means to offer any knowingly forged document as true, such as a forged check. The person who offered the forgery must have known that the document was falsified, and must have had the intent to injure or defraud.

Your Defense to Charges of Forgery, Counterfeiting, or Uttering in Miami, Florida

If you have been charged with forgery in Miami, do not hesitate, and contact an experienced Florida criminal lawyer at The Baez Law Firm to schedule your free consultation right away. Forgery is a serious crime that carries serious punishments; to ensure that you do not serve the time for a crime that you did not commit, contact our Miami criminal defense law firm at 800-588-BAEZ right away.