The Use of Forensic Genealogy to Solve Cold Cases Is On the Rise with Law Enforcement, But Is It Reliable and Legal? 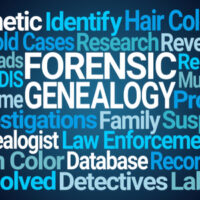 Law enforcement is increasingly relying on the field of forensic genealogy to help solve cold cases. The method involves combining DNA testing with family histories to solve cases that have not only gone unsolved for decades, but potentially related cases linked to the same suspects as well. Police are increasingly excited about and relying on these forensic methods, even though associated boundaries and privacy issues still have not been resolved because they are so new. This is especially of concern given the number of Americans who have participated in DNA kits and the fact that those individuals are linked to all of their family members, who are then also accessible to law enforcement.

Historically, DNA fingerprinting, which relies on an individual’s unique pattern, was used to generate profiles of criminal suspects for the FBI’s criminal database. However, hair is now quickly becoming a powerful source to help catch suspects, and this includes pulling DNA from samples that are contaminated or damaged, without the root, leading to an increasingly available pool of forensic evidence. This DNA evidence is then used with ancestry records to assemble family trees and identify suspects.

As a result, those who work on reconstructing the family tree of victims will discover an alleged suspect and then link that suspect to additional unsolved murders that occurred decades ago; even though the DNA from victims’ ones is too damaged to establish their identity. The suspect is then named by the researchers and awaits trial for all of these crimes even though they may have taken place in the 70s or 80s and the age of any associated evidence is arguably of concern in terms of reliability.

DNA fingerprinting and the FBI’s system has relied on high-quality, detectable DNA from one person, which can be very difficult to obtain, leading to cases going cold in large part because the DNA Is either damaged, contaminated by bacteria, or mixed with DNA from several people. As a result, DNA from cold cases generates hits less than one percent of the time. Conversely, these new methods reconstruct entire genomes from simple fragments, allowing genealogists to identify suspects that the FBI cannot.

The U.S. Department of Justice is moving quickly to endorse these methods: It just released its first policy on their use and stated that investigators of violent crimes who had already exhausted traditional methods such as fingerprinting could consider genealogy. At the same time, DNA data is growing rapidly: Ancestry.com and 23andMe alone reports sequencing the  genomes of more than 30 million people; just within the last 10 years. According to one study, 60 percent of Americans are identifiable through their family members, even if they did not participate in a DNA kit. As a result, critics of these new methods have pointed out that police could essentially track everyone and possibly over collect genetic material. This is frightening, given that DNA holds such private information, and checks and balances have not yet been set up to supervise these methods and systems.