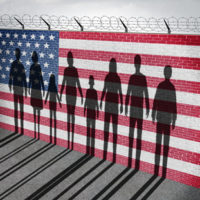 On April 17th, the U.S. Supreme Court struck down a law that would have allowed the federal government to deport criminals who have committed “serious crimes.” This decision will affect the administration’s ability to deport individuals who very vaguely have a criminal record of some kind, as the justices pointed out just how unconstitutionally vague the law was as written.

Specifically, the law defined “violent felony” for purposes of the Immigration and Nationality Act’s removal provision. The Act essentially guarantees that any alien convicted of an “aggravated felony” after entering the United States will be deported, while very broadly defining “aggravated felony” to arguably cover most-all crimes, both minor and serious.

Consequences of the Ruling

Tuesday’s ruling is expected to spare thousands of people from deportation, striking down a very flawed law that applied in a number of criminal and immigration cases, and which violated the due process rights of many. The law broadly defined “aggravated felony” as any offense that, by its nature, involves a substantial risk that physical force against the person or their property may be used in the course of committing the offense,” potentially encompassing a vast number of past crimes. It also defined “aggravated felony” as “a crime of violence for which the term of imprisonment is at least one year.”

A 1951 U.S. Supreme Court decision declared that criminal and immigration laws should be tested against the same standard for vagueness due to the “grave nature of deportation.” Then, three years ago, the U.S. Supreme Court ruled that a similar law was unconstitutionally vague, where courts could end up finding that a number of crimes—including car burglary, evading arrest, trespass, etc.—technically constituted similarly serious crimes. Both laws required that the courts identify hypothetical offenses and judge the risks of violence arising from them.

Justice Kagan also pointed out that the lower courts had been unable to apply the immigration law consistently, which is a serious issue. In a message very obviously directed to the government and its multiple attempts over the years to lump most-all criminal activity into serious felony activity, Kagan pointed out that “insanity is doing the same thing over and over again, but expecting different results.”

Still, the decision does not affect the court’s decision in February that people held in immigration detention are not entitled to periodic hearings in order to determine whether they can be released on bail.

You are guaranteed certain rights under the U.S. Constitution. At the Baez Law Firm in Orlando, we have extensive experience in assisting defendants whose due process rights have been violated. Contact us today to find out more.