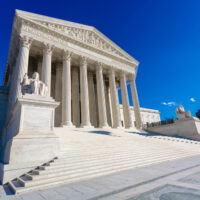 The U.S. Supreme Court kicks off its new term on October 7, and has several “blockbuster” criminal law cases that raise significant questions for criminal defendants.

The first of those cases–Kahler v. Kansas–considers the constitutionality of a state statute that one criminal defendant (Kraig Kahler) argues abolished the insanity defense (while the state maintains it is simply “redefining” insanity’s role in culpability). The case involves a defendant who was sentenced to death for killing his ex-wife, two daughters, and mother-in-law in 2009. The state is arguing that criminal defendant Kahler is not insane because his actions are proof that he had a “requisite intent to commit the murders” and, in doing so, it has blocked his ability from using the insanity defense at all in court. In response, Kahler argues that this approach (i.e. the state’s statute dictating what can and cannot be presented in court) violates the eighth amendment (prohibition on cruel and unusual punishment) and 14th amendment (guarantee to due process of law) because it denies him the right to present an insanity defense even though he lacked the moral capacity to tell right from wrong when he committed these crimes. While the state admits that it no longer allows for insanity as an affirmative defense in criminal trials, it claims that the statute is still constitutional because it allows for a defendant to admit evidence of mental disease or defects, which then effectively allows for mentally ill defendants to be found exempt from criminal liability.

A number of law professors and philosophers around the country filed an amicus brief in the case, arguing that the state law cannot be constitutional because a mentally ill defendant can form intent to commit a crime while still being unable to tell the difference between right or wrong, which means they are unable to comprehend the consequences of their actions. In other words, someone can have an intent to kill without necessarily being able to understand the morality of the act. They argue that, if the state law is upheld, and the insanity defense is abolished in one state, defendants will be punished, regardless of this understanding of responsibility, and this could encourage other states to pass similar laws. This is arguably antithetical to what a number of societies have long held; that the ability to tell right from wrong is a prerequisite to culpability.

The other criminal case before the Court—Ramos v. Louisiana—poses the question of whether a criminal defendant can be convicted without a unanimous verdict from the jury. The defendant was sentenced to life in prison without the possibility of parole and a state intermediate appeals court rejected his argument that the Sixth Amendment—which guarantees our right to an “impartial jury”—necessarily requires a unanimous jury verdict.

If you have been charged with a crime in Florida, contact our experienced Orlando criminal attorneys at the Baez Law Firm today to find out how we can provide you with the very best in legal advice and representation.