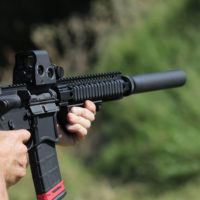 Even though owning bump stocks has been illegal in Florida for months now, citizens have reportedly continued to own them, and a number of attorneys have challenged the ban in courts; arguing that it is unconstitutional for the state to take away residents’ property without first providing compensation. However, the recent decision made by the US Supreme Court to deny the appeal on the ban from gun rights advocates could now solidify existing bans in states like Florida, automatically rendering any existing constitutional challenges moot.

The Ban in Florida

Bump stocks are rifle attachments that are attached to weapons and allow shooters to fire bullets more quickly. When the ban went into effect here in Florida several months ago, owners were not grandfathered in, and, instead, owning the devices became illegal right away;  and punishable as a third-degree felony, carrying a five year prison term and/or a $5000 fine.

Still, according to Florida law enforcement officials, there still are no existing, active programs in the state to take bump stocks away from residents, and only a handful of residents have turned in the attachments since the ban was passed. In addition, the law does not technically require law enforcement to collect and destroy the stocks.

However, as of late March, bump stocks appear to effectively be prohibited everywhere, especially now that the US Supreme Court has denied an appeal to block the federal ban. The ban requires that all bump stocks be handed over at a Bureau of Alcohol, Tobacco, Firearms and Explosives office, or destroyed.

In addition, just because law enforcement has not taken action on the bump stock ban yet does not mean that they are inactive when it comes to pursuing other weapons-related charges. Some of the most common weapons charges include allowing a minor to access a loaded firearm, carrying a concealed weapon, improper exhibition of a firearm or weapon, possession of a firearm in spite of a felony conviction, and unlicensed carrying of a concealed firearm. In addition, charges related to firearms being carried and/or discharged during the commission of another crime can carry a prison sentence of up to 25 years.

Contact Our Florida Weapons Charge Defense Attorneys with Any Questions

If you or a loved one is facing weapons charges here in Florida, contact our experienced Orlando criminal defense attorneys at the Baez Law Firm today to find out how we can help. There are a number of exceptions that allow Florida citizens to carry concealed firearms, including but not limited to self-defense and depending upon where you are traveling to/from.