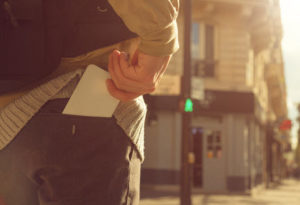 Butt-dials are an ongoing joke with owners of cell phones, mainly because many people commit the occasional butt-dial and may be overheard saying or doing something they would not otherwise want an outsider to be privy to. While many people on the receiving end of butt-dials typically only overhear banal conversation, music, or an embarrassing snippet or two of a private discussion, some butt-dials are much more informative, and can land the caller in serious hot water. Take the case of Huff v. Spaw (2015) for instance, in which one butt-dial is used as evidence to charge two men with discrimination.

According to the court records of the United States Court of Appeals, Sixth Circuit, James Huff, chairman on the Kenton County Kentucky Airport Board, accidentally pocket-dialed the airport CEO’s assistant, Carol Spaw. When she answered, Carol tried several times to make her “presence” known to Huff and his companion, Vice Chairman Larry Savage. The two men continued on with their conversation, oblivious to the fact that Carol could hear every word. Their conversation consisted of – amongst other topics – sincere discussions about how to replace the airport’s CEO, Candace McGraw. Spaw, outraged by the discussion, decided to record it and report it to the proper authorities. Spaw believed that the two men were “engaged in a discussion to unlawfully discriminate against McGraw.” Once the 91-minute conversation was over, she turned over the evidence to the proper authorities. Within months, the call was in court, with Huff contending that Spaw violated Title III of the Omnibus Crime Control and Safe Street Act by “intentionally intercepting their oral communications” and using said communications against them.

The problem with oral communications is that they are not necessarily protected from interception, as there is no reasonable expectation of privacy from eavesdroppers. Just like there is no telling who may spot a philandering spouse out on a date with his mistress, one can never know who will overhear their conversation—no matter the precautions taken to prevent having it overheard.

According to the court records, Huff admitted that he was aware of the risk of making unintentional calls while his phone was in his pocket, and that he had made such calls before with the same phone. Furthermore, Huff knew that there are ways to prevent pocket dials from occurring – such as locking one’s phone – but that he neglected to take preventative measures before sliding his phone back into his pocket. With all of that evidence in mind, the courts ruled that, “A person who knowingly operates a device that is capable of inadvertently exposing his conversations to third-party listeners and fails to take simple precautions to prevent such exposure does not have a reasonable expectation of privacy [for the conversations that are exposed].”

Implications of Such a Ruling

As Miami’s leading criminal defense law firm, our criminal defense lawyers understand just how serious the implications of this ruling can be anyone with a cell phone. If your private conversation is overheard and recorded by the wrong person, you may find yourself faced with charges for a crime you may or may not have known that you committed. Because of this, we urge cell phone users to always lock their phones or even turn them off when in a pocket, handbag, or other risky location. If your phone does butt-dial someone, you run the risk of having whatever is overheard being used against you.

If you recently committed a butt-dial that you fear will get you into trouble, contact The Baez Law Firm right away. We will help you fight any charges brought against you due to the accidental call, and even aggressively fight to have the call recording removed from the courts as evidence. To schedule your free consultation with our Miami criminal defense lawyers today, call 800-588-BAEZ now.