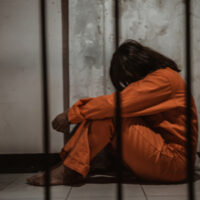 According to studies, it is estimated that approximately 77 percent of female criminal defendants are abuse victims, meaning that women are being sent to prison in droves for simply acting in self-defense. Take, for example, LeToya Ramseure, who fatally shot her ex-boyfriend in self-defense, but faced criminal charges as a result and, because she could not post bail or afford an attorney, ended up going to prison. Or the case of Cyntoia Brown, who was released after spending 15 years of a life sentence in prison after killing the man who kept her as a teenager sex traffic victim.

In some of these cases, those responsible for the arrests and prosecutions blatantly ignored active protection orders in place; evidence that these individuals were victims of domestic or other types of violence and crimes against them. The problem also exists at the arrest stage: Today, the arrest rates for women are highest for offenses that include criminal mischief, harassment, local ordinance violations, and public disorder, as well as substance abuse, minor property crimes and simple assault. In fact, without a strong criminal defense attorney advocating for them, many of these women are wrongfully arrested and charged and the proper evidence and testimony is never presented at trial.

The Rule Rather Than the Exception

Indeed, the rates of criminalization of those who have survived domestic and/or sexual violence and the extreme sentences that they often face are appalling, and often include life without the possibility of parole. They include women who were found guilty of abducting their own children after attempting to protect themselves and their children from abusers, booked for criminal aggravated assault and attempted murder after escaping an attack by driving away from the assailants and striking one of them in the process, prosecuted for aggravated assault with a deadly weapon after shooting at a wall in an attempt to escape an attacker, and a number of similar stories like these.

In lieu of custodial arrest, some law enforcement agencies are employing the following methods in an attempt to avoid taking someone into custody after arrest:

If You Are Facing Charges, Contact Our Experienced Criminal Defense Attorneys

If you are facing criminal charges after acting in self-defense, it is crucial that you work with an experienced defense attorney who can ensure that your rights are protected and you do not pay for a crime when you are innocent. If you have any questions, contact the experienced Orlando criminal defense attorneys at The Baez Law Firm today for a consultation.