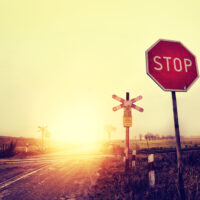 In late November, a woman and her two children were struck and killed by an Amtrak passenger train here in Florida, which was traveling from Miami to New York City. All three victims were in the vehicle and died upon impact. According to reports, the victims were going camping when the car was struck by the train near the Corbett Wildlife Area.

The accident was likely due to the fact that the railroad crossing had no gate and the tracks were about 25 yards from the turn off the highway. While there were railroad markers and a yield sign, brush had overgrown shielding the signs from visibility for drivers entering the area; indicating that there could be a claim for negligence.

Of course, Amtrak has its history of placing people in danger: Passengers and their survivors won a $265 million court settlement after the 2015 Philadelphia derailment that ended with eight people dead and hundreds injured. As a result, Amtrak quietly added a clause to its ticket purchases in 2019 which forces anyone who rides the train and is injured or killed to go into arbitration instead of before a judge or jury.

Still, that doesn’t apply to those who are not riding the train and who are injured through no fault of their own. Of course, in this case, there would have had to have been some negligence on Amtrak’s part. It is arguable that whoever is responsible for ensuring that the railroad markers and yield sign are visible for drivers entering the area could be sued for negligence in this case, and an argument could be made that the railroad crossing had a gate.

Litigants have successfully brought wrongful death claims against train companies and their crews for negligence, intentional conduct for maintaining inadequate warning devices at the railroad crossing, failure to clear the right of way of vegetation and other obstructions, and similar claims. Typically, defendants will raise contributory negligence as a defense, along with other claims, such as negligence per se for failing to yield the right-of-way and even federal preemption in response to plaintiffs’ claims of inadequate warning devices.

If You’ve Lost a Loved One in Florida Due to Negligence, Our Wrongful Death Attorneys Can Help

If you have lost a loved one due to a company or city’s negligent or intentional act, the Orlando wrongful death attorneys at the Baez Law Firm can fight for your right to compensation. We’ve worked on countless wrongful death cases in Miami, Orlando, Tampa, and throughout Florida, and we are experienced in obtaining justice in these cases. Contact our office today to schedule a consultation and find out more.