Can The Police Follow Me Into My House Just Because They Think I Did Something Wrong? 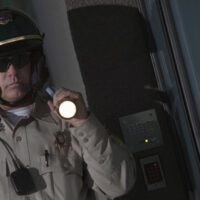 The police normally cannot enter your home without your permission or a warrant. But the courts have long made an exception for certain “exigent” or emergency circumstances. For example, if the police believe someone is about to destroy evidence–e.g., flushing illegal drugs down the toilet–that can justify a warrantless entry into a home.

Another emergency scenario that comes up is a fleeing suspect. That is, if you are wanted by the police and run into your house, do the officers have to wait for a warrant or can they follow you inside? The U.S. Supreme Court recently addressed this question in a decision, Lange v. California, that has significant implications for privacy rights.

The underlying facts of this case are fairly simple. The defendant was driving his car while “listening to loud music with his windows down and repeatedly honking his horn,” according to the Supreme Court. This caught the attention of a California Highway Patrol officer who decided to follow the defendant and signal him to pull over. At this point, the defendant was only about 100 feet from his house, so he continued to drive into his garage.

After getting out of his car, the defendant spoke with the officer. The officer observed “signs of intoxication” and administered field sobriety tests. Subsequently, the officer arrested the defendant and charged him with drunk driving, a misdemeanor offense in California.

At trial, the defendant argued all evidence of his intoxication was illegally obtained, since it occurred after the officer entered his garage without a warrant. The state argued that even before the officer suspected drunk driving, he had “probable cause” to arrest the defendant on another misdemeanor charge, failing to comply with a police signal. The California courts accepted this argument.

But the Supreme Court did not. It held that under the Fourth Amendment’s warrant requirement, the “pursuit of a fleeing misdemeanor suspect does not always–that is, categorically–justify a warrantless entry into a home.” The Court emphasized its traditional rule that exigent circumstances needed to be assessed on a case-by-case basis. And given that misdemeanor crimes run the gamut of seriousness,” the police will often not face “the kind of emergency that can justify a warrantless home entry.” Basically, the Court said that when a police officer has “time to get a warrant, he must do so,” even if the misdemeanor suspect has fled into his house.

(It should be noted that the State of California itself did not defend the “categorical” rule applied by its own courts to this case, and the Supreme Court had to appoint a third-party lawyer to defend the lower courts’ position.)

Obviously, intentionally fleeing the police is never advisable. But even when you are suspected of a crime, the police still need to follow the law before entering your home or property. An experienced Orlando criminal defense attorney can help ensure the courts respect your rights. Contact the Baez Law Firm today if you need to speak with a lawyer right away.