Can You File a Civil Rights Lawsuit if All You Ask for is $1.00 in Damages? 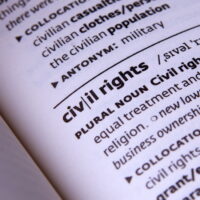 When the government violates your civil rights, you have the right to file a lawsuit. But before a court can hear your case you first must establish legal standing. This means you need to show that you suffered an actual injury–not merely a hypothetical one–as the result of the government’s misconduct. You also need to show there is a lawful remedy the court can provide to redress that injury.

In a civil rights case, a remedy can mean either injunctive relief–an order to stop the government from continuing to violate your rights–or monetary damages. If neither of these remedies are available, you lack standing. For instance, if you sue for injunctive relief, but the government agency in question abandons the challenged conduct, then you no longer have a legal remedy unless you also requested monetary damages.

The United States Supreme Court recently addressed an important question arising from this principle–namely, does a person have standing to pursue a civil rights claim if they only seek “nominal” monetary damages. Basically, can you file a civil rights lawsuit if all you are asking for is $1.00 in damages?

The case before the Court, Uzuegbunam v. Preczewski, involved a Georgia college student who wanted to promote his religious beliefs on school grounds. The student started handing out religious literature on an outdoor plaza in front of the school library. A school security officer then informed the student this was not permitted under campus policy.

When the student made inquiries to school officials, he learned that the policy only permitted distribution of religious materials in one of two designated “free speech expression areas,” which only comprised a small portion of the campus. The student later obtained a permit to distribute his literature in the free speech area, but was again stopped by campus police, who told him his actions violated another school policy.

The student and one of his colleagues subsequently filed a federal lawsuit, accusing a number of college officials of violating their First Amendment rights. The lawsuit initially sought both nominal damages and injunctive relief. During the course of the litigation, the school decided to abandon the “free speech zone” policies in question, essentially mooting the students’ request for injunctive relief.

This left only the claim for $1.00 in nominal damages. A lower federal appeals court held this was insufficient to maintain standing, since the students were not seeking any additional compensatory damages. The Supreme Court agreed to review the case and in an 8-1 decision reversed in favor of the students.

The Court explained that in these types of cases, “Nominal damages are not purely symbolic.” They simply reflect the default amount of damages a plaintiff can receive unless they establish “entitlement to some other form of damages.” It is therefore possible for $1.00 to serve as a sufficient remedy to redress a civil rights violation.

The practical impact of the Supreme Court’s decision may be limited. But it serves as an important reminder that civil rights violations are taken seriously by the courts. If your liberties have been harmed through the actions of a public official and you need to speak with a qualified Orlando civil rights lawyer, contact the Baez Law Firm today to schedule a consultation.