How Does Restitution Work in a Florida Criminal Case? 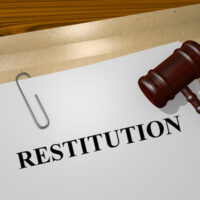 If you are convicted of a crime in Florida, you may be required to pay restitution to your victims. This is separate from any jail time or probation you may be required to serve. Florida law separately permits the judge to order restitution for any “damage or loss caused directly or indirectly by the defendant’s offense.” If there is any dispute as to the appropriate amount of restitution, the judge must decide the final amount based on a “preponderance of the evidence.” Of course, the burden is on the prosecution–not the defendant–to provide that evidence.

As a Florida appeals court recently explained, the judge is required to hold an evidentiary hearing in the event of a restitution dispute. The judge cannot simply order the defense to pay a lower amount of restitution that requested by the prosecution without first conducting such a hearing.

In this particular case, State v. Dixon, prosecutors in Pinellas County charged the defendant with stealing money from her employer. Specifically, the defendant allegedly failed to enter certain cash payments into the employer’s register and instead pocketed the money. The prosecution and the defense attempted to negotiate a plea agreement, but they could not agree on the amount of restitution owed to the employer.

The defendant offered to pay $3,000. The prosecution said the employer’s losses were closer to $21,000. At a hearing before the judge, the prosecution said a loss prevention officer for the employer reviewed security camera footage and identified $1,839.56 in receipts that the defendant stole over a two-week period. The $21,000 figure was then extrapolated by applying that rate of loss to a four-month period.

The trial judge suggested the defendant accept a final plea where she agreed to pay just $1,839.56, the amount identified as stolen by the surveillance footage reviewed. The prosecution argued they could prove more was taken if the judge would allow a full hearing. The judge apparently declined to order such a hearing and entered a final plea agreement that included $1,839.56 in restitution.

The Florida Second District Court of Appeal said this was a mistake and ordered a full hearing on restitution. Indeed, the appellate court noted that both the prosecution and the defense had requested such a hearing. So there was no reason not to hold one.

Failure to Comply with Restitution Orders Can Have Serious Consequences

It is worth noting that restitution is also available in cases where a victim suffered physical injuries. In those cases, restitution can include requiring the defendant to pay the costs of the victim’s medical care, rehabilitation, and even their lost income.

Also keep in mind, restitution in a criminal case is not like a civil monetary judgment. You cannot get rid of a restitution order in bankruptcy. And if you fail to pay the money you owe for restitution, you are effectively violating a condition of your probation or parole and can be sent to jail.

So if you are charged with a criminal offense and are concerned about the potential impact of a restitution order, contact the Orlando white collar crime attorneys at the Baez Law Firm today to schedule a consultation.