How the “Double Jeopardy” Rule Works in Florida Criminal Cases 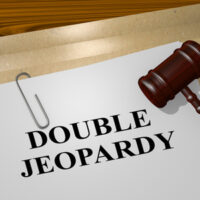 One of the oldest principles of American criminal law is the prohibition against double jeopardy. Under our Constitution, no person can be “subject for the same offense to be twice put in jeopardy of life or limb.” Among other things, this means the government cannot retry you for the same crime if you have already been found not guilty by a jury. Nor can you be punished twice for the same offense.

Now, the double jeopardy rule does contain some critical exceptions. Because of federal nature of our judicial system, it is possible to be charged in both Florida state and federal courts for crimes arising from the same underlying acts. This is not considered a double jeopardy violation because of the principle of “dual sovereignty,” i.e., the state and federal governments exist as separate legal entities. Nor does double jeopardy prevent a prosecutor from bringing multiple charges arising from a single act that happens to violate multiple statutes.

The Florida Supreme Court recently weighed in on the applicability of double jeopardy to multiple criminal charges arising from one car accident. The case before the justices, State v. Marsh, involved a rear-end auto accident. The driver of the rear vehicle, the defendant in this case, was charged with two crimes as a result of the accident: (1) driving under the influence (DUI) of illegal substances and causing serious bodily injury; and (2) driving with a suspended license (DWLS) and causing serious bodily injury. Here, the bodily injury occurred to the same two people, who were passengers in the vehicle struck by the defendant.

The defendant entered a general “no contest” plea and reserved her right to appeal. On appeal to an intermediate court, she argued that dual convictions for DUI and DWLS violated the double jeopardy rule. The intermediate court agreed, relying on its decision from a similar case decided in 2008, Kelly v. State. But since this decision conflicted with the rulings of two other Florida appellate courts, the prosecution appealed to the Supreme Court.

The Supreme Court, in turn, overruled the intermediate court’s opinion and said the defendant’s dual convictions could stand. There was no double jeopardy violation, the Supreme Court said, because DUI and DWLS differed enough to the point where they could not be reasonably viewed as the same crime. Put another way, the Court said that DUI and DWLS each contained a necessary “element” that the other did not. DUI requires proof of intoxication, while DWLS requires proof that the defendant’s driver’s license was suspended. Neither one of these unique factors appear are an element of the other crime, so it was fair game for the prosecution to charge the defendant with both.

If you are arrested on suspicion of committing a crime, you may be facing multiple charges arising from the same incident. You need an experienced Orlando criminal defense attorney by your side to aggressively represent your interests. Contact the Baez Law Firm today to schedule a consultation with a member of our team.