The First Amendment On Trial 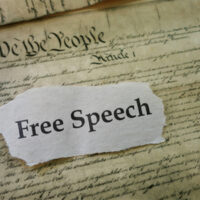 The US supreme court has been petitioned to review an incredibly important First Amendment free-speech case, McKesson v. Doe. The case involves a police officer who was allegedly assaulted at a black lives matter protest, and who is now seeking damages against the individual who organized the protest even though he had nothing to do with the alleged assault. In other words, the issue at stake involves the question of whether someone can sue an organizer of a protest for what happens when a protest turns violent.

The stakes are high in this case: If the Supreme Court does not accept the case and rule against the officer, the Fifth Circuit’s ruling will serve as a weapon against those who organize protests, scaring them into silence and dissuading them from exercising their free-speech rights.

The current lawsuit isn’t just being brought against any protest organizer, but the national organizer of the black lives matter movement. The district court initially dismissed the case due to previous Supreme Court case NAACP v. Claiborne Hardware Co.,  finding that, unless those injured in a protest can show that an organizer incited the specific violence that hurt them, protest organizers face limited liability and those harmed can only directly sue the individuals who harm them. The Supreme Court had already specifically recognized that fear of a private tort lawsuit can silence people as effectively as a criminal prosecution.

However, the officer appealed, placing the case in the hands of the Fifth Circuit which, after two years of sitting on the case and refusing to hear oral arguments, directly contradicted existing US Supreme Court precedent and held that the organizer could be held liable for damages; in doing so, finding that he had “ignored the foreseeable risk of violence that his actions created.”

If Allowed To Stand, It Could Crush The Ability To Peacefully Assemble

The case has had a strange history on the Fifth Circuit, first coming out of a three judge panel, with one judge then changing his mind and dissenting at a later date, and then a new appointee coming along and attempting to distinguish the case from the NAACP case. Regardless, the decision, as it stands, preserves the ability for police to sue demonstrators and hold them liable for the actions of others.

Will The Current Supreme Court Reverse Past Decisions?

There is no question that free speech and assembly rights are under assault. Another issue of concern is the possibility of the US Supreme Court reversing its own precedent in light of its recent action in Ramos v. Louisiana  and placing criminal defendants’ rights in jeopardy in doing so. While the decision rendered in Ramos was ultimately a victory for criminal defendants in states such as Oregon, where they could still be convicted for serious offenses even with split juries, the concern is that the Supreme Court could now start reversing previous decisions when it comes to well-established criminal defendants’ rights regarding searches and seizures, probable cause, warrants, search incident to arrest, Miranda rights, and activities entitled to the protection of the First Amendment.

Contact Our Florida Civil Rights Attorneys with Any Questions or Concerns

Under the U.S. and Florida Constitution, you have a number of protected rights, and those rights – including the right to assemble and the right to free speech – cannot be criminalized. If you have any questions or concerns, contact our Orlando civil rights lawyers at the Baez Law Firm today.