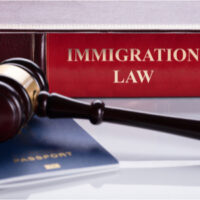 A criminal case that also involves First Amendment free speech rights argued before the US Supreme Court in late February is an important case that could have severe repercussions for a number of citizens. If the Court rules in favor of the government, it could criminalize a significant amount of speech, ensnaring not only a number of attorneys who advise and represent immigrants, but anyone and everyone who speaks with immigrants and encourages them to stay in the country illegally, including family members, ministers, human rights advocates, and more.

The Case & Question Before The US Supreme Court

The case involves a consultant who was convicted of illegally encouraging and inducing aliens to remain in the US, mail fraud, and tax violations in connection with her business, which involved (fraudulently) advertising that she could help clients obtain green cards even though they were technically ineligible to stay in the US. The 9th Circuit Court of Appeals threw out one out of three of her convictions – encouraging undocumented individuals for staying in the US – finding that the interpretation of the statute that she was charged under was a violation of the First Amendment and the statute itself was far too broad and unconstitutional.

The question before the US Supreme Court is now whether this federal law, which criminalizes encouraging or inducing illegal immigration “for commercial advantage or private financial gain,” is unconstitutional.

Based on how the Court justices received the arguments in late February, both the conservative and liberal judges appear to agree with the 9th Circuit, as reflected in the hypotheticals they posed to the US government’s attorney. They included questions about whether a grandmother who tells her illegal granddaughter to stay in the US could be charged with a crime, or a charity that provides assistance to immigrants who are in the country unlawfully, etc. In response to the government’s contention that the law had not been used that way, Justice Sotomayor pointed out that one US citizen was in fact already arrested and prosecuted for informing her housekeeper that if she left the country, she may not be able to come back, and Justice Gorsuch pointed out that given that being in the US illegally is not a crime, encouraging someone to stay in the US illegally should also not be a crime.

If You Have Been Unjustly Charged for Exercising Your Civil Rights, Contact The Baez Law Firm

The Baez Law Firm offers clients the very best legal representation in criminal defense and civil rights throughout Florida in all areas of the law, both federal and state. Nationally recognized and one of the most sought after trial lawyers in the country, Orlando criminal lawyer Jose Baez is known for his commitment to obtaining justice for his clients in complex cases. Contact our office today for immediate assistance and to find out more.