What Happens If I Waive My Right To Counsel In A Criminal Trial? 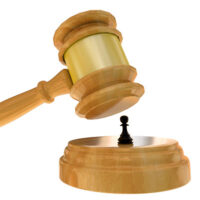 The Constitution guarantees your right to be represented by a qualified attorney at every stage of your criminal trial. As with any such right, you can waive your right to counsel and represent yourself. Should you do this? No. We will not go into all of the reasons here, but suffice to say, self-represented defendants typically do not like the outcome of their cases. And when they are convicted, they often find appellate courts unsympathetic to requests for a new trial.

A recent decision from the Florida Supreme Court puts this in perspective. In Noetzel v. State, prosecutors charged a defendant who was already serving a life sentence with conspiring with another prisoner to kill a corrections officer. The defendant and his partner managed to stab–but not kill the officer–but they did manage to kill another prisoner in the process.

Facing a capital charge, the defendant told the arraignment judge that he wanted to waive his right to counsel and enter an immediate guilty plea. Another judge later conducted what is known as a Faretta hearing. This is basically a hearing where the judge must decide if the defendant has made a “knowing and intelligent” waiver of their right to counsel.

The judge said that “out of an abundance of caution,” he would have a doctor examine the defendant to confirm that he was mentally competent to stand trial. The appointed doctor found the defendant was competent. The expert report also reiterated the defendant suffered from major depressive disorder and other mental health impairments.

The defendant opted to have the judge impose sentence. The judge ultimately imposed the sentence of death. The defendant then appealed directly to the Florida Supreme Court, arguing that the trial court erred in “allowing him to waive counsel and represent himself.”

Essentially, the defendant’s claim on appeal was that the trial court should have made a more forceful inquiry into his competency based on his admission he was prescribed medication to treat depression. But as the Supreme Court explained, under these facts the trial court was never required to conduct any sort of competency hearing in the first place. The role of the Faretta hearing was simply to determine if the defendant had made a “knowing, voluntary, and intelligent” waiver of his right to counsel. The mere “disclosure” of mental illness did not, in the Supreme Court’s view, automatically negate the finding that the defendant met the Faretta standard.

The right to counsel is one of the most basic constitutional protections afforded a person accused of a crime. You should never hesitate to take full advantage of this right. If you have been arrested and need legal advice from an experienced Orlando homicide lawyer, contact the Baez Law Firm today.