What Happens When a Juror Lies About Their Background? Can You Get a New Trial? 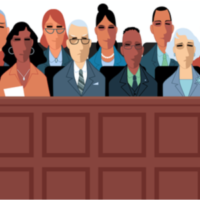 The right to a jury trial is an essential legal protection for anyone charged with a crime in Florida. It has been long understood that jurors should be impartial and “indifferent” to the case at trial. To put it in simpler terms, a juror should not harbor or exhibit any personal bias against the defendant.

As you probably know, the prosecution and the defense have the right to question potential jurors beforehand to screen for any potential bias. This process, known as voir dire, helps to ensure the final jury is impartial. But what happens if a juror lies or omits information during voir dire? Can a defendant ask for a new trial on that basis alone?

The Florida Supreme Court recently clarified the standards for dealing with such situations. The Court heard and dismissed an appeal in a capital case, Martin v. State, where the defendant learned only after exhausting his initial appeals that one of the jurors who voted to convict him had “remained silent” during a critical portion of voir dire.

The defendant was tried for first-degree murder and armed robbery in 2009. During voir dire, the prosecutor asked the potential jurors a number of routine questions, including if they (or a close friend or family member) had ever been arrested or been the victim of a violent crime. One juror, identified as Smith, did not respond to these questions. As it turned out, Smith had been found delinquent as a minor on a sexual battery charge. He also had an adult arrest for DUI, and when Smith was just 10 years old, he witnessed the murder of his grandfather.

The Court denied post-conviction relief. In evaluating Smith’s omissions during voir dire–which he readily admitted to when questioned under oath later–the Supreme Court said it was not enough for the defense to prove that a jury was dishonest “in response to a material question.” In a post-conviction proceeding, the defendant “must establish that the juror’s misconduct resulted in the defendant being denied his constitutional right to an impartial jury.” That, in turn, requires proof the juror in question had an “actual bias” against the defendant. Here, there was no such proof, so the defendant’s conviction and death sentence stood.

When your life is on the line, you must aggressively assert your constitutional rights in court. An experienced Orlando homicide attorney can provide you with skilled advice and representation. Contact the Baez Law Firm today if you need to speak with a lawyer right away.