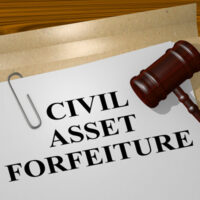 It is common practice for federal prosecutors to seek forfeiture of property believed to be connected to criminal activity. Sometimes forfeiture proceedings are part of the underlying criminal prosecution of the individual defendant. But there is also civil forfeiture, where the government technically sues the property itself rather than the owner.

Civil forfeiture does not require the government to prove the owner committed any crime. Instead, the prosecution need only prove by a preponderance of the evidence–a lower burden of proof than required in criminal cases–that the property is subject to forfeiture. The owner is entitled to a trial but they must prove that the property was not involved in, or obtained as a result of, any illegal activity. Alternatively, the owner can raise an “innocent owner” defense and, if proven, they can still get their property back.

Civil forfeiture has long been controversial due to its effect on the constitutional right to due process. A recent decision from the U.S. 11th Circuit Court of Appeals only adds to these concerns. The case, United States v. Approximately $299,873.70 Seized from an East West Bank Account, specifically dealt with the due process rights of non-U.S. citizens facing forfeiture of their property.

According to federal prosecutors in Alabama, a group of American and Chinese nationals concocted a scheme to obtain fraudulent work visas on behalf of Chinese clients. The clients allegedly agreed to deposit $300,000 each into a U.S.-based bank account.

The Alabama prosecutors eventually prosecuted and obtained convictions against four individuals accused of leading the scheme. Prosecutors did not criminally charge any of the Chinese clients. Rather, the government sought civil forfeiture of the U.S. bank accounts used to pay for the allegedly fraudulent visas.

Fourteen of the affected Chinese clients contested the government’s actions. But the State Department would not allow four of these Chinese nationals to actually travel to the United States to attend the trial in person because, well, they had previously attempted to obtain fraudulent visas. The prosecution and the Department of Homeland Security attempted to work out an arrangement that would let the four individuals into the country temporarily, but “there was insufficient time before trial to complete the process,” according to the 11th Circuit.

The four Chinese nationals then moved to dismiss the forfeiture claims, arguing that their inability to appear personally at trial violated their due process rights under the Fifth Amendment. The trial court denied the motion. The four individuals were still represented by an attorney.

On appeal, some of the losers renewed their objection to the fact they were not allowed into the U.S. to personally attend the trial. The 11th Circuit held, however, that this was not a due process violation. Since this was a civil, not a criminal matter, all the Chinese nationals were constitutionally entitled to was representation by an attorney in court, which they had.

Civil forfeiture is just one potential consequence of a criminal investigation. If you are suspected of committing a crime and are concerned about this or other potential consequences, it is imperative you speak with a qualified Orlando federal crimes lawyer as soon as possible. Contact the Baez Law Firm today to schedule a consultation with a member of our team.