What Is Money Laundering? 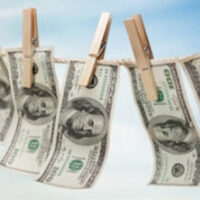 The phrase money laundering is commonly associated with large-scale organized crime. But anyone can face a money laundering charge, even when the underlying criminal activity is relatively small. Indeed, many people are not even aware of what activities qualify as money laundering until they are actually charged.

The basic concept behind money laundering is fairly easy to understand: A person takes proceeds from an illegal activity and converts it into “clean” money by investing it into an otherwise legitimate operation. The term “money laundering” is actually attributed to the infamous Chicago gangster Al Capone, who reportedly used a chain of laundromats to conceal the proceeds of his criminal enterprises.

Let’s consider a hypothetical example of money laundering. Jane embezzled $100,000 from her employer. She cannot simply put that money into her bank account, as that would raise suspicions. Instead she uses the embezzled funds to purchase a series of small money orders and deposit them over time.

Now, a more complex example–and one more common with organized crime–would be to launder cash through an existing legal business. If someone wanted to conceal the profits from a drug operation, for example, they might “invest” it in a restaurant. The restaurant then “re-invests” the money in other businesses. Ultimately, the drug money is passed through several entities, both to conceal the original source of the funds but also to avoid paying income tax. After completing this pass-through process, the money is then used to purchase a legal good that can easily be transported, such as jewelry.

How the Law Defines Money Laundering

What Are the Possible Defenses to Money Laundering?

It is not unusual for innocent people to get caught up in a money laundering case, especially if prosecutors are going after a larger criminal enterprise. Depending on the specific facts of a case, possible defenses to a felony money laundering charge include:

If you are charged with money laundering or any other white collar offense, it is in your best interests to work with an experienced Orlando criminal defense attorney who will zealously represent your interests in court. Contact the Baez Law Firm today to schedule a consultation.