When Is Evidence Of Other Crimes Admissible At Trial? 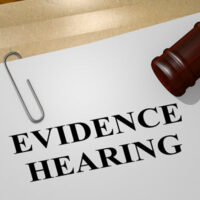 A criminal trial must be decided based on the evidence the defendant committed the alleged crimes. A trial is not a forum to try the defendant’s character or other unrelated crimes. That said, Florida courts have long followed a principle known as the Williams Rule that does allow a jury to consider a defendant’s past criminal history in certain limited circumstances.

The Williams Rule dates back to a 1959 Florida Supreme Court decision. In its modern form, the rule “allows introduction of similar fact evidence of other crimes or acts by the defendant that are relevant to prove a material matter in the prosecution.”

In practical terms, Williams Rule evidence is most commonly used by prosecutors to establish either a motive or a particular method of committing a crime (i.e., a modus operandi.) In the latter case, it is not enough to show an unrelated crime is similar to the charged crime. There typically must also be some “special character” or “unusual” aspect of the crimes to help establish the defendant as the perpetrator.

The Florida Second District Court of Appeals recently held that the same exact weapon as used in multiple crimes can be sufficient to satisfy the Williams Rule. The case before the appeals court, State v. Donaldson, is an ongoing prosecution. The state charged the defendant with committing four separate murders, all on different days. The defense asked the court to try each of the cases separately, as there was no evidence they were part of the same criminal incident.

The trial court agreed to sever the trials. But the prosecution asked to introduce evidence of the other murders in each severed trial. The state’s forensic evidence suggested all four murders were committed with the same .40-caliber Glock, which was the same gun the defendant purchased two days before the first of the four murders. Essentially, the prosecution wanted to argue that since all four murders were committed with the same weapon, that could be used to separately establish the defendant’s guilt of each murder.

The trial court rejected that argument, holding the four murders themselves were not “sufficiently similar to warrant the admission in each individual trial.” On appeal, the Fourth District disagreed and held that evidence of all the murders was admissible in each trial under the Williams Rule. The Fourth District explained that while the fact all of the murders were committed with the same gun did not establish a modus operandi, it could still be used to establish the defendant committed all four crimes with the same weapon.

Criminal cases often turn on pre-trial rulings on the admissibility of certain evidence. That is why it is crucial to work with an experienced Orlando homicide lawyer when you are facing a potential life sentence. Contact the Baez Law Firm today to schedule a free confidential consultation with a member of our team.