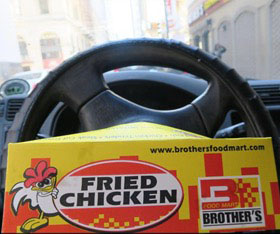 On September 21, 2022, Imad “Eddie” Hamdan and his business partner, Ziad “Z” Mousa, sat in a federal district courtroom while anxiously awaiting to hear the fate of their American Dream. After three days of deliberations, the federal jury found the co-owners of Brothers Food Mart were not guilty of an array of felony charges, which included mail fraud, criminal tax-related charges, and the harboring of illegal aliens. Finally, after three years of uncertainty and distress, Hamdan and Mousa could at last return to a life of normality with their families.

In 2019, the Government charged Hamdan and Mousa each with one count of conspiracy to harbor illegal aliens, two counts of mail fraud, and seventy counts of tax-related charges, which included 47 counts of failure to withhold, account for, and pay over to the IRS taxes due and owed on behalf of employees of Brothers Food Mart, and 21 counts of aiding and assisting in the preparation and presentation of false federal tax returns. Both men faced maximum prison sentences on more than 70 counts if convicted.

The evidence presented by the United States Government included:

Despite the complex immigration and tax-related issues involved in the case and the Government’s compelling evidence against Hamdan and Mousa, the Defense was able to secure not guilty verdicts for Hamdan. Specifically, The Baez Law Firm maintained Hamdan’s innocence on all charges brought against him by demonstrating that:

This case is a classic example of governmental overreaching, specifically on the tax charges. As the Defense exhibited throughout the trial, Hamdan’s good faith efforts were evident. The irrefutable evidence proved that the Government received a sizeable amount of money, grander than it would have received had Hamdan filed his taxes correctly.

Fortunately, the community came through for Hamdan, just as Brothers Food Mart always came through for its community. The verdicts made it clear that the jurors also considered the Government’s case a severe overreach and disapproved of such actions.

Lastly, on September 21, 2022, the great American Dream lived. The Defense, the jury, and the verdict proved that individuals like Hamdan and Mousa can immigrate to the United States in search of a greater life for their families and their constitutional rights will be protected and honored by the court system.